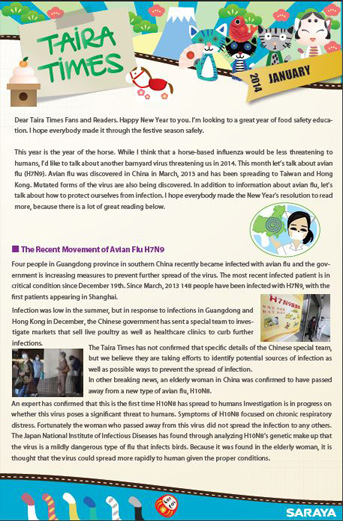 Dear Taira Times Fans and Readers. Happy New Year to you. I'm looking to a great year of food safety education. I hope everybody made it through the festive season safely. This year is the year of the horse. While I think that a horse-based influenza would be less threatening to humans, I'd like to talk about another barnyard virus threatening us in 2014.

This infectious bacteria is found mainly in the intestines, and infects through contaminated meat, water or other surfaces. E. coli can cause infection with as little as 100 cells. It releases a verotoxin that destroys blood vessels in the large intestine, causing cold-like symptoms that lead to diarrhea, bloody feces, severe abdominal pain and vomiting.
Salmonella

Salmonella is a common bacteria, and it is often spread by contaminated food from humans, rodents, and insects to foods. Salmonella infects with a large number of cells that are able to survive in adverse environments. Symptoms of foodborne infection include nausea, stomach pain, fever and diarrhea, and it is often treated with antibiotics.
Campylobacter

Campylobacter is found in the intestines of many animals, and infects from contaminated meat, milk and water. The bacteria itself can survive low temperatures (below 4 degrees C) such as in refrigerators. Infection can easily be caused by very few cells, and symptoms include fever, headache, diarrhea and abdominal pain for 2 to 7 days.
Staphylococcus aureus

This bacteria is common to mucous membranes in humans and animals. Illness usually occurs when uncooked foods such as sandwiches, salads and desserts are prepared by somebody with a skin infection allowing staphylococcus aureus to secrete a toxin into the food. Symptoms typically include nausea, vomiting, diarrhea and abdominal pain.
Vibrio parahaemolyticus

Vibrio parahaemolyticus is found in specific saltwater environments and infects from improperly cooked seafoods such as fish and shellfish. Because of its environmental requirements, it is often easy to wash or kill, but infection rates are increased when food is consumed raw. Symptoms include diarrhea, pain, nausea and vomiting for 2 to 3 days.
Norovirus

Norovirus is a virus unique to the human large intestine, however food poisoning is often associated with consuming raw oysters or clams, which can become contaminated from human feces in the water. As few as 10 viruses can cause an infection resulting in nausea, vomiting, diarrhea and pain. Additional symptoms include possible fever, headache and muscle pain.
Preventing Food Borne Illness